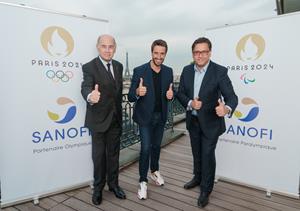 PARIS – 07/13/2021 – Tony Estanguet, Chairman of Paris 2024, Paul Hudson, Sanofi Chief Executive Officer, and Serge Weinberg, Chairman of Sanofi’s Board of Directors, today announced Sanofi will become a Premium Partner of Paris 2024 for the Olympic and Paralympic Games being held in Paris in 2024. Paris will become the second city to host the summer Olympic Games three times with the last Games held in Paris 100 years ago in 1924.

For Sanofi, whose headquarters are based in Paris, this commitment to Paris 2024 is a unique opportunity to engage its 100,000 employees in one of the largest sporting events in the world.

Sanofi’s commitment to Paris 2024 also highlights the company’s societal impact strategy and affirms its commitment to the values ​​of inclusion, diversity and openness to the world, as well as its environmental ambition.

The company welcomes the desire of Paris 2024 foster the values of the Games to make them even more open to the public and more sustainable and intends to contribute by highlighting the benefits of physical activity on health.

Sanofi CEO Paul Hudson added:
“Sanofi is proud to contribute to the success of the Olympic and Paralympic Games Paris 2024. It represents a great opportunity to unite our employees around values ​​shared with the Olympics and Paralympics, such as inclusion and diversity, openness to the world, courage, determination and excellence.”

As with the work the Company has been doing with the Sport dans la ville association for more than 15 years to integrate young people socially and professionally, sport is a vector of hope and perseverance. Sporting events bring progress and each year, Sanofi employees from throughout the world are actively involved in raising awareness among the population about the impact of diseases and on the daily lives of patients who suffer from them.

Tony Estanguet, Chairman of Paris 2024, said:
“I am happy that a leading French company like Sanofi is joining the Paris 2024 adventure. We share the same values ​​of high standards, creativity and sharing, and the same desire to be useful. Sanofi’s mobilization alongside us will enable us to promote the Games throughout France, to share the benefits of sport with as many people as possible, and to contribute to a more active and healthier society.”

Finally, through this partnership and the engagement programs that will be offered by Paris 2024, the French Company intends to mobilize its employees and its sites in Paris and throughout France to contribute to the success of the Olympic and Paralympic Games in its native country.

Serge Weinberg, Chairman of Sanofi’s Board of Directors, comments:
“Paris 2024 will be a major global event for France and it is important for Sanofi to contribute to its success. The Olympic and Paralympic Games Paris 2024 will highlight Sanofi’s exceptional footprint in France and our contribution to the dynamism of its regions.”

The Olympic and Paralympic Games are the leading sports event in the world and have a unique media impact, bringing together some 10,500 Olympic and 4,350 Paralympic athletes respectively representing 206 and 182 delegations from five continents. The Games are followed by over 13 million spectators and 4 billion viewers around the world through more than 100,000 hours of TV coverage, and their impact as a global event of great sporting, economic and cultural importance is unparalleled.

Founded in January 2018, Paris 2024 is headed by Tony Estanguet, a three-time Olympic champion and IOC member. It is administered by an Executive Board (EB) that brings together all the project’s founding members: CNOSF, the City of Paris, the state, the Île-de-France Region, CPSF, the Greater Paris Metropolitan Area, the Seine-Saint-Denis Departmental Council and representatives of the local authorities involved in the Games.

FS Bancorp, Inc. Reports Net Income for the Second Quarter of 2021 of $8.5 Million or $0.97 Per Diluted Share, and Implemented Previously Announced Two-For-One Stock Split and Scheduled Payment of the Thirty-Fourth Quarterly Dividend

You may have missed